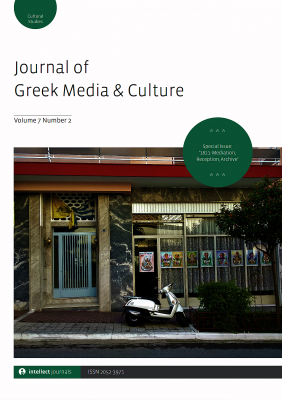 Journal of Greek Media and Culture 7.2 is out now! Special Issue

Intellect is pleased to announce that Journal of Greek Media & Culture 7.2 is out now!

The Journal of Greek Media & Culture (JGMC) is an interdisciplinary peer-reviewed journal that aims to provide a platform for debate and exploration of a wide range of manifestations of media and culture in and about Greece. The journal adopts a broad and inclusive approach to media and culture with reference to film, photography, literature, the visual arts, music, theatre, performance, as well as all forms of electronic media and expressions of popular culture. While providing a forum for the close analysis of cultural formations specific to Greece, JGMC aims to engage with broader methodological and theoretical debates, and situate the Greek case in global, diasporic and transnational contexts.

The journal aims to set the foundations for a sustained and serious engagement with Greek culture and media that will not only enlighten particular manifestations, but will have methodological relevance and implications that extend beyond its specific field of study. Greek culture can thus become a limit case that tests the value and rigour of critical positions in the debate around Europe’s cultural unity and diversity, and instigates important theoretical and methodological enquiries around media and cultural exchange and interaction.

2021: Spectres of Commemorations Past

Encountering a divine dance of solidarity at the Zalongo Monument

Real and imagined Greek women in Victorian perceptions of ‘1821’

A revolution of one’s own: Elizabeth Edmonds translates the Greek War of Independence

Athens besieged: Greek and Ottoman perceptions of shifting space during the Greek Revolution of 1821

The Greek War of Independence in Turkish historiography

Subversive literary representations of 1821 in the Metapolitefsi (1974–81)

From national panegyrics to stage scandal: Athanasios Diakos in history

Athens ’21: Undoing the demos in the year of the pandemic