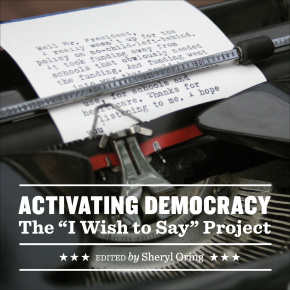 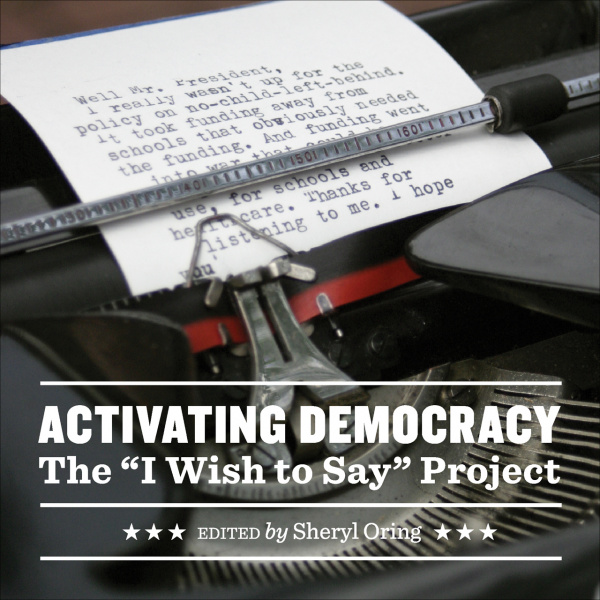 The "I Wish to Say" Project

Driven by a powerful belief in the value of free expression, Sheryl Oring has for more than a decade been helping people across the United States voice concerns about public affairs through her 'I Wish to Say' project. This book uses that project as the starting point for an exploration of a series of issues of public interest being addressed by artists today.

Driven by a powerful belief in the value of free expression, Sheryl Oring has for more than a decade been helping people across the United States voice concerns about public affairs through her 'I Wish to Say' project. This book uses that project as the starting point for an exploration of a series of issues of public interest being addressed by artists today. It features essays by contributors ranging from art historians and practicing artists to scholars and creators working in literature, political science and architecture. All the contributors offer a different approach, but they share a primary goal of sparking a dialogue not just among makers of art, but among viewers, readers and the concerned public at large. The resulting volume will be an essential resource for politically engaged contemporary artists searching for innovative, cross-disciplinary ways of making and sharing art.

Sheryl Oring is assistant professor of art at the University of North Carolina at Greensboro, as well as a practicing artist.

Taking a Moment to Have a Say - Corey Dzenko

Part I – Ruminations: The Artist’s Perspective

The Typewriter: An Ode to Its Smells, Sounds, and Tactile Responses - Sarah Shun-lien Bynum

The Look: Patty and Her Avatars - Santiago Echeverry

The Question: The Door to What We Most Want to Know - Chloë Bass

The Camera: Coming to Terms with Photographing People - Dhanraj Emanuel

The Digital Archive: Maintaining Privacy by Giving It All Away - Hasan Elahi

The Paper, the Game, and the City Park: Places for Things to Happen - Lee Walton

The City: The Political Equator and the Radicalization of the Local - Teddy Cruz

The Road: Stories From the Navajo Nation - Stephanie Elizondo Griest

Toward a Sociability of Objects - Edward Sterrett

Efficacy, Trust, and the Future of Civic Engagement - David B. Holian

Part III - Conclusion: Listening and the Power of Small Acts

Conclusion: Listening and the Power of Small Acts - Sheryl Oring

“I WISH TO SAY:” SEQUELS

“I WISH TO SAY:” Chronology and Credits

'Walter Benjamin famously asserted that mechanical reproduction would emancipate works of art from ritual, never anticipating the coming age of compulsive Instagam sharing, ritualized text messaging, and overall information-overload. In a counter-intuitive move artist Sheryl Oring improbably dusts-off antiquated slow-technology (the typewriter) in order to resurrect the declining art of non-digital communication (also known as composing a letter to your political representative). The unhurried, heart-felt messages generated by Oring’s I Wish to Say project calmly testify to the significance of her rescue plan for a society bedeviled by pixilated manias and the allure of electronic display screens. '

'"URGENT," “PAST DUE” and “FINAL NOTICE” are stamped on postcards typed from dictation of ordinary people and subsequently sent to the President. By listening to and transcribing people's hopes, dreams, anger and pleas, Sheryl Oring's “I Wish to Say” is a performative speaking truth to power. This book beautifully presents this project and its participants, while providing insightful context and analysis of artists who are forging new pathways in ephemeral socially engaged art.'

'I Wish to Say exercises art’s muscles in the social practice of democracy. In the midst of America’s fractured body politic, the project delivers thoughtful, pluralistic participation. It invites us to talk back to power with the power of the wish, to express our concern. It’s the human microphone distributed across so many people, places, and moments in time. '

'Now that politics and performance art are one and the same, Sheryl Oring’s facilitation of public engagement through her Franklin Furnace Fund performance art work, 'I Wish to Say,' is a fitting and needed action.  In this 2016 election season, I expect many folks will wish to say something to our Presidential candidates!'

'Activating Democracy tells the story of speaking truth to power, one person at a time. Sheryl Oring has activated democracy by stressing conversation over voting and reactivating a seemingly abandoned, deeply gendered tool of communication: the typewriter. Her voice is inseparable from that of her interlocutors, the many U.S. constituents participating in the project, as well as the co-authors and readers of this book. We have much to learn from her and the artists, scholars, and activists included, as we all ask ourselves what we would say to the U.S. President and how we hold him accountable. Directly challenging the “deskilling” so often ascribed to socially engaged art, the practice’s common figure of ‘the artist as conduit’ is here paired with the insistence on a continuity of skill through the provocative use of typing as a craft and aesthetics whose urgency is far from nostalgic. In a time where electoral democracy is most strongly defined by its constant fundraising pleas and shocking campaign expenditures, this book’s many artistic and scholarly contributions are also a much needed antidote to the endless polls and feedback loops presented to us as public opinion by the mainstream media.  '

'The book includes samples of the postcards from 2004 through 2016. Along with sharing the voices of some of the 2,500 people whose cards she typed, Oring discusses politically engaged contemporary art from a variety of viewpoints. Chapters include topics like photographing people, dissent, free speech in a digital era, civic engagement, social practice, the role of artist books, and turning strangers into neighbors.'

'At times social engagement can remain contained within the art world, whereas Oring’s project is very much a public endeavor, interfacing with participants from all walks of life. This key element of inclusion creates a relatively pleasant experience for participants... This book fills that void and sets up a more elaborate and academically minded discourse aimed to reassert the project’s art world presence. The essays in this volume play off one another, building a robust and comprehensive understanding of Oring’s practice. More than anything, the book conveys that after thirteen years of postcards, Oring, above all else, has listened.'