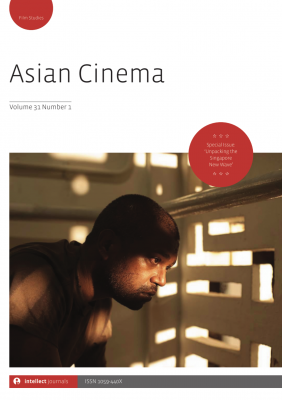 Intellect is pleased to announce that Asian Cinema 32.2 is out now!

Asian Cinema is a peer reviewed journal devoted to the advancing of Asian cinema studies throughout the world. It offers a platform for scholars, teachers and students who seek to form and promote communities of Asian cinema studies within Asia and beyond. Whether understood in the terms of traditional (celluloid) or cross-media (digital) formats, Asian cinema has wide geographical dispersion, and diverse practices and histories. It is the flagship publication of the Asian Cinema Studies Society, established in 1984. Asian Cinema has been published continuously since Vol. 7 (1995), serving as a key resource for Asian film researchers, teachers and students.

Beyond aesthetics: The long take as the nation-form in the cinema of Lav Diaz

‘Why am I still imprisoned in your eyes?’: Re-visioning ‘leftover women’ and the female gaze in Send Me to the Clouds

Filming the Singaporean killer: Trauma, murder and modernity in Medium Rare (1991) and God or Dog (1997)

Purba film as a prototype of Malay film genre: A preliminary exploration