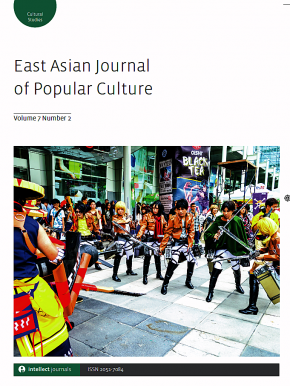 East Asian Journal of Popular Culture 7.2 is out now!

Intellect is pleased to announce that East Asian Journal of Popular Culture 7.2 is out now!

The East Asian Journal of Popular Culture is the first academic peer reviewed journal for scholars, teachers, and students from around the world who have an active and passionate interest in the popular culture of East Asia. The journal is devoted to all aspects of popular culture in East Asia and the interplay between East Asia and the wider world. With the growth in popularity of Asian visual products in the western world and the increasing strength of the Asian markets, this publication fulfills the need for an international journal that allows western and Asian film, media, literary, music, fashion, digital media, television, art and cultural scholars alike to engage in discussion. In the last few decades there has been a huge rise in the interest in East Asian popular culture. The East Asian Journal of Popular Culture will be engaging directly with that trend. From film to music; art to translation and fashion to tourism, this journal will offer a forum where multidisciplinary work can come together in new and exciting ways.

Friend and foe: Wei Te-Sheng on Taiwanese emotions towards Japanese colonization and the Japanese perspectives of Ryotaro Shiba and Yoshinori Kobayashi

Spatialization of Confucian ethics in the Song of China

Attack on normativity: A queer reading of Shingeki no Kyojin (Attack on Titan)

Godzilla and Rodin’s The Gates of Hell

Travelling through East and South East Asia with John Saboe