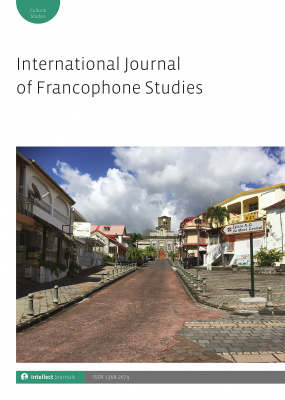 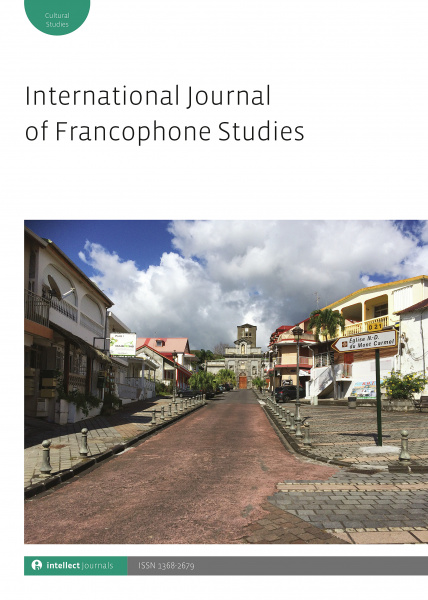 The premiere bilingual outlet for Francophone postcolonial studies, Francophone Studies is a peer-reviewed, international, interdisciplinary journal that enables extensive opportunities for the study of ‘France outside France'. It promotes groundbreaking research on the fundamental nature of the relationship between colonial history and culture, and postcolonial cultural production. Interests have developed to include the impact of modern French culture in global world culture and the impact of this global culture on French hexagonal culture, and subsequent intellectual, cultural and political developments.

The International Journal of Francophone Studies offers a critical preview for a new development in the understanding of ‘France outside France', with a thorough insight into the network of disciplinary issues affiliated with this study. The peer-reviewed journal complements the thriving area of scholarly interest in the French-speaking regions of the world, bringing a location of linguistic, cultural, historical and social dynamics within a single academic arena.

This international journal offers a wide range of research expertise in the literature, culture, language, society, history, politics, film, arts, theatre and media of French-speaking areas from the colonial period to the present day. We plan a pattern of volumes that will enable students, teachers, researchers, policy makers, professionals and academics from related fields to study the French-speaking world in depth in an interdisciplinary context and to become familiar with France outside France.

The field of Twentieth-Century French Studies has been dramatically changed by the rise of post-colonial paradigms. These have generated Francophone studies on, for example, African and Caribbean writers, film makers, ethnicity, politics, linguistics, literature, culture, and especially in the fields of women's studies. This journal seeks to stimulate intellectual investigation: it explores the variety of voices, groups, societies, and practices for which contemporary francophone intellectual circles are negotiating the colonial and post-colonial forces that are transforming their world. Inevitably, as the debates broaden, they include the study and discussion of various experiences in post-colonialism, migration, slavery, oppression, resistance, representation, identities, race, gender, language policy, place and responses to the influential discourses of imperial France. These include history, philosophy, and linguistics, and the fundamental experiences of speaking and writing by which all these come into being. The legacy of colonial France is expressed through ethnicity, language, religions and secular power. These material conditions and their relationship to questions of ideology and representation are at the heart of the most vigorous debates in recent post-independence theory.

Francophone studies are no longer easy to define. They are linguistic and aesthetic, literary and performative, ethnic and intercultural, anthropological and historical, sociological and political. They are a mode of behaviour. If we are to come to an understanding of francophone cultures and societies, they must be written about with precision and taught in detail. This journal is designed as a forum for investigating what Francophone Studies are, how they work and what their place in post-modern society may be. We are conscious that there is an institutional pressure on French departments to develop links with other communities. This, of course, is not a new demand on our discipline, but one that requires us to rethink the dimension of French. The image of metamorphosis in the Francophone world is challenging attitudes within and outside France. Francophonia is a living speech community and network of economic relations which spans the globe but exits within the context of the global dominance of English. 'Francophone studies' can be said to address a double 'minority', in that it is concerned with the indigenous cultures and languages that the French Empire attempted to supplant and then assimilate. National identities in Francophonia concern the intersection between the present dominance of English, former French colonial mastery and indigenous cultures.

It is the ambition of the Journal that our readership is kept up-to-date with developments of francophone studies in Universities and Colleges around the world. At any rate the short introductions are a fascinating resource for the individual who may wish to pursue the methods and the studies by which we attempt to approach the idea of 'Francophone Studies'. However, if a particular department or group of people feel that they have specific approaches or relevant topic to articulate, IJFS is meant to be a forum for such endeavours. We hope to set up challenging debates that partake in the contemporary pedagogy of French studies. Although for most people studying and talking about Francophonie as a clear field of study seems both a concrete and immediate French discipline, we would welcome contributions that choose to focus on aspects and problem areas rather than a fixed area of study. The content of the Journal will, most obviously, include:

Authorised translations of literary and dramatic texts
Bio/bibliographies
Interviews with authors and writers
Creative works that are not published elsewhere
Finally, we aim to bring together, under one title, articles that are currently published as peripheral items in journals from other disciplines and to bring the fruits of the best researchers to an international readership.

Eric Sellin
Former Professor of the University of Tulane

Liz Gauvin
Former Professor of the University of Montreal