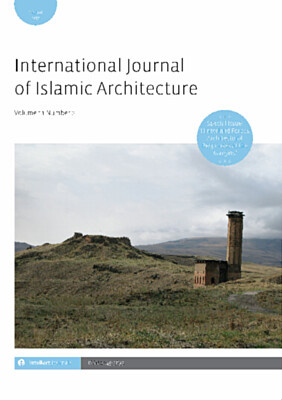 International Journal of Islamic Architecture 11.2 is out now! Special Issue

Intellect is pleased to announce that International Journal of Islamic Architecture 11.2 is out now!

The International Journal of Islamic Architecture (IJIA) publishes bi-annually, peer-reviewed articles on the urban design and planning, architecture and landscape architecture of the historic Islamic world, encompassing the Middle East and parts of Africa and Asia, but also the more recent geographies of Islam in its global dimensions. The main emphasis is on the detailed analysis of the practical, historical and theoretical aspects of architecture, with a focus on both design and its reception. The journal also aims to encourage dialogue and discussion between practitioners and scholars. Articles that bridge the academic-practitioner divide are highly encouraged.

While the main focus is on architecture, papers that explore architecture from other disciplinary perspectives, such as art, history, archeology, anthropology, culture, spirituality, religion and economics are also welcome. The journal is specifically interested in contemporary architecture and urban design in relation to social and cultural history, geography, politics, aesthetics, technology and conservation. Spanning across cultures and disciplines, IJIA seeks to analyse and explain issues related to the built environment throughout the regions covered. The audience of this journal includes both practitioners and scholars.

IJIA is grateful for sponsorship from the AKPIA at MIT and Aga Khan Award for Architecture.

Hinterland of a Hinterland: The Changing Capital Cities of Sultanate and Mughal Bengal

‘A Place of Our Own’: Puerto Rican Muslims and Their Architectural Responses as Quadruple Minorities

Islamic Art and Architecture in a Contested Region: Negotiating the Muslim Heritage in Meskheti, Georgia

The Right to the Suburb: The ‘American Dream’ of Palestinian Citizens of Israel

Ex Africa Aliquid Novum [There is something new coming from Africa]: Herman Haan and Aldo van Eyck’s Journeys in a Pseudo-Ethnographic Vein

The Album of the World Emperor: Cross-Cultural Collecting and the Art of Album-Making in Seventeenth-Century Istanbul, Emine Fetvaci (2019)