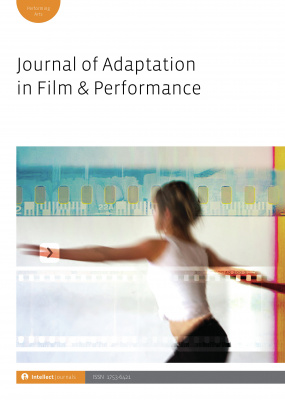 Journal of Adaptation in Film & Performance 15.1-2 is out now! Special Issue

Intellect is pleased to announce that Journal of Adaptation in Film & Performance 15.1-2 is out now!

Adaptation and translation in the form of the conversion of oral, historical or fictional narratives into stage drama have been common practices for centuries. In our own time the processes of cross-generic and cross-cultural transformation continue to be extremely important in theatre as well as in the film and other media industries. Adaptation and the related areas of translation and intertextuality continue to have a central place in our culture and profound resonance across our civilizations. As an academic discipline, adaptation studies has begun to establish itself in the last few decades as an important area of scholarship and research which – alongside translation studies – continues to make significant contributions to our analysis and understanding of a complex and increasingly diverse world culture.

The aim of this journal is to offer a forum for discussion and analysis of adaptation and/or translation in performance and as creative practice in the context of the following media: theatre, film and television, radio and audio, music, dance, opera, gaming and graphic narratives.

‘Variations on a scale’: British Music Hall and instances of adaptation as performance

Adaptation and gestic oscillation: Jane Eyre at the National Theatre

‘Peter Brook’s Night of the Living Dead’: Horror, cinema and the post-war theatre

Journey to the West: Cross-media adaptations of a Chinese classic tale

Time and relative dimensions in serialization: Doctor Who, serialization, fandom and the adaptation of a police box

‘Everything transforms and nothing changes’: Strategies of adapting The Transformers toys into a TV series