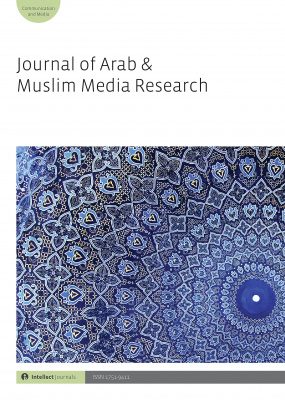 Journal of Arab & Muslim Media Research 15.1 is out now!

Intellect is pleased to announce that Journal of Arab & Muslim Media Research 15.1 is out now!

The Journal of Arab & Muslim Media Research (JAMMR) is a refereed academic publication dedicated to the study of communication, culture and society in the Arab and Muslim world. It aims to lead the debate about the rapid changes in media and society in that part of the world. This journal is also interested in diasporic media like satellite TV, radio and new media, especially in Europe and North America. The journal serves a large international community in the West as well as the Arab and Muslim countries.

Creating the culture of saving: Framing a life without excess in the Emirati media

The menstrual taboo and the nuances of misogyny: Comparing feminine hygiene TV advertisements in the Arab and western worlds

Crisis communication amid the COVID-19 pandemic in Morocco

Terrorism, Islamophobia and White supremacy: Comparing CNN and the BBC coverage of the Christchurch mosque shooting

The great Syrian exodus: A discourse-historical approach to Syrian asylum seekers in the Turkish press coverage (2011–15)

The shifting grounds of humour: The case of Masameer in Saudi Arabia

Towards a representation model of Arabs and Muslims: USA TV series as an amplifier of the cultural hegemonic speech (case study: Homeland)