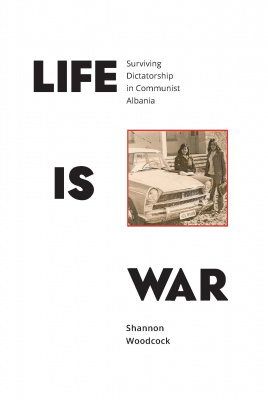 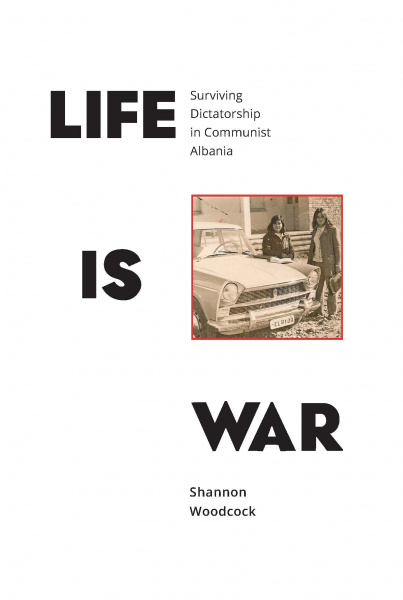 A collection of oral histories that guides readers through through the decades (1944–92) in which the Communist Party controlled everything in Albania; what work one could do, what food was available, and even who one could marry.  Based on personal interviews with six men and women who survived Enver Hoxha’s communist regime.

The book reveals how everyday people survived political persecution and oppression, and champions human resilience in the face of unrelenting political terror.

In Life in War, the reader accompanies Shannon Woodcock, the author and historian, through intimate interviews with six Albanian men and women. We hear how everyday people survived shocking living conditions, political persecution and oppression dependent on ethnicity, political status, gender and sexuality.

This is a thorough and vivid history of lived communism in Albania, charting political and ideological shifts through the experiences of those who survived. Life is War stands as remarkable and profound testimony to the resilience of humanity in the face of unrelenting political terror.

An accurate and precise historical work, engagingly rendered from life narratives, it plunges the reader into the difficult emotional truths that are at the core of remembering Albania’s communist past.

Life is War is a valuable contribution to studies of everyday life under communism and dictatorship. Eloquently written and expertly researched, it will appeal to readers interested in life histories, war, communism, European history and trauma studies.

Shannon Woodcock is a historian who has published widely in recent Romanian and Albanian history, particularly the history of anti-Romani racism in Romania, post-socialist discourses of sexuality as identity in Eastern Europe, and the history of everyday life in Albania under Enver Hoxha (1945-85). Shannon is the main editor of Sextures: E-journal for Sexualities, Cultures and Politics.

Thoma Çaraoshi joins the party and sells the sheep

Stories to make you laugh and cry - Mevlude Dema

Just one moment can break a soul - Diana Keçi

Every historian has their past - Professor Riza Hasa

Life is War gives voice to the experiences of Albanians – men, women, Romani, Vlachs among them – who survived Enver Hoxha’s notoriously repressive and increasingly isolated regime. The stories Shannon Woodcock chronicles enrich our limited knowledge of everyday life in Albania, and are a welcome addition to social histories and collected memory studies of the communist period in Eastern Europe.

This book is one of those rare works that combines that best of two worlds, academia and literature. The book is rigorously academic in its investigation, analysis as well as the insights it offers. At the same time it reads like a novel that you cannot put down. Through moving individual life stories Woodcock allows the reader to peer into and understand everyday life in a totalitarian system. Hence, these are not the stories of some isolated and random individuals. They are carefully chosen and detailed accounts of individual struggles, suffering and survivals that sum up the life of a whole nation under an oppressive communist regime.

Its combination of academic rigour and literary skill sets this book apart from other works on communist Albania in particular and communism in general. As an academic work the book throws a unique and penetrative gaze on everyday life in communist Albania. One of its many academic merits here is that it dispels socially held notions in Albania about the strong rule of law under communism, as opposed to a lawless transition period, by disclosing how in everyday life Albanians experienced state power as highly arbitrary and unpredictable. As a literary work the book is unparalleled in its redemptive character as far as the victims of Albanian communism are concerned. Through the act of narration this book redeems the stories and lives of its characters, which would have otherwise perished in oblivion. One can hardly ask more of a book.

In this engaging and moving book, Shannon Woodcock provides English-language audiences with a rare and often brutal portrait of the Communist rule of Enver Hoxha (1944-1985), through her careful recording of the memories of ordinary Albanians who lived through 'that time'. From poor peasants and workers, to people with ‘bad biographies’, the book’s subjects recount, with often excruciating detail, the dreams and lives that were crushed, and also the small but significant ways some of them defied the regime. As one woman puts it: these are stories 'that could make you laugh and cry at the same time'. In the best tradition of oral histories of dictatorship, Woodcock highlights the ruthlessness of state repression, the intimacies brought about not just by solidarity, but also by mistrust and enmity. But she also conveys the importance of jokes and humour as modes of survival, the power of which endures through memory in the form of what the author aptly calls 'retrospective rebellion'. As well as a study of violence, trauma and remembering, this is a powerful book about the intensity, intimacy and imagination of story telling. The tales of twenty-first century Albanians blends with astute historical commentary and accounts of contemporary life in one of Europe’s poorest nations. Woodcock’s detailed descriptions of her impressions during two years traveling through the country leave the reader with a vivid picture of the Albanian landscape – and also of the enduring legacy of dictatorship and hardship in the lives and struggles of people today.