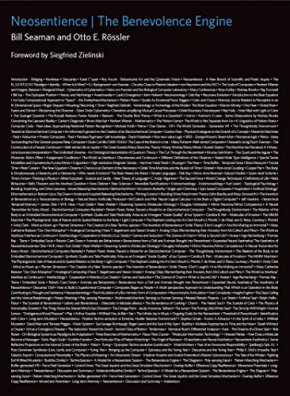 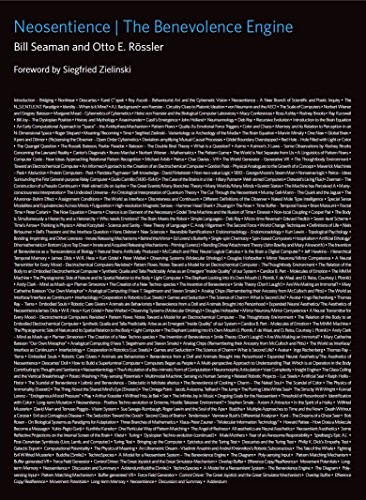 Artist and media researcher Bill Seaman's term 'neosentience' describes a new branch of scientific inquiry related to artificial intelligence. This book focuses on the work of Seaman and theoretical physicist Otto E. Rossler in exploring the potential of an intelligent robotic entity possessed of a form of sentience that resembles that of a human.

The study addressed in this 'book' puts forward a project that is twofold. Firstly, it discusses the conceptual basis within which it would be possible for the construction of a 'neosentient' system, a machine endowed with the capacity to perceive or feel things in the world, as if manifesting a proto-form of (artificial) consciousness. Secondly, it hypothesizes about the rising of benevolence through the interaction/intra-action, between 'neosentient' machines and their environment, which include us, human beings, as inhabitants. The manuscript tackles its task in a very particular manner as it interrelates a constellation of ideas in order to address key research agendas on the fields of language, aesthetics, philosophy, biology, physics, science, technology, mind and consciousness to name some. The goal of the book is not to define the structure within which such an engine could be built, it does not bring into light the blueprint of such an, but it nails down key concepts from a broad range of topics, mapping a path for future research, reinforcing this way the sense of feasibility of its enterprise. In doing so, the book illuminates trajectories, ramifications or even non-directly correlated ideas that would pass unnoticed to the reader’s mind, were not by the authors generously bringing into play sets of key scholars, theories, discoveries and even speculative ideas.

Bill Seaman is professor in the Department of Art, Art History, and Visual Studies at Duke University. Otto E. Rossler is professor of theoretical biochemistry and a chaos researcher at the Institute for Physical and Theoretical Chemistry at the University of Tübingen in Germany.

Although the manuscript’s subject might fit within the domains of Artificial Intelligence, Artificial Life, consciousness and mind studies, the approach to these topics comes from a poetic/scientific point of view within which its originality becomes apparent. Both authors have directly or indirectly contributed to the field of arts and profusely written on correlated subjects and its intersection with the domains of science and technology. This gives to the book a unique approach, which is insightful, speculative and substantial at the same time. This intuitive side of the manuscript owes to that fecund conjunction between arts and science.