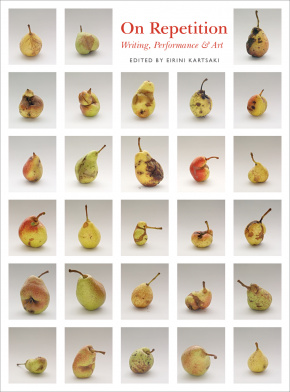 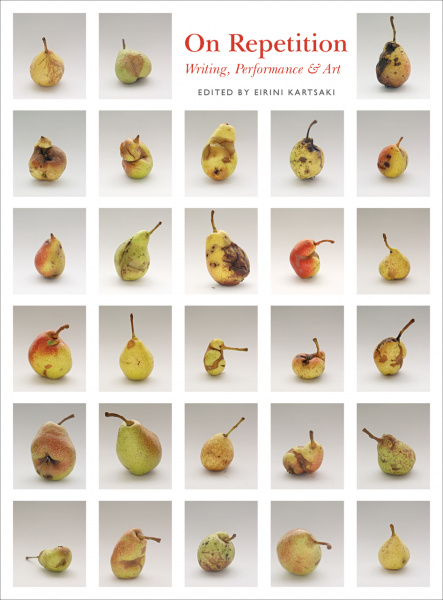 On Repetition aims to unpack the different uses and functions of repetition within contemporary performance, dance practices, craft and writing. The collection, edited by Eirini Kartsaki, explores repetition in relation to intimacy, laughter, technology, familiarity and fear – proposing a new vocabulary for understanding what is at stake in works that repeat. Drawing on psychoanalysis, philosophy, linguistics, sociology and performance studies – and employing case studies from a range of practices – the essays presented here combine to form a unique interdisciplinary exploration of the functions of repetition in contemporary culture.

Eirini Kartsaki is a teaching fellow in theatre and performance studies at Queen Mary University of London. She is also the editor of On Repitition.

Persisting Forever: Introducing Repetition
Eirini Kartsaki
Chapter 1 - Of Secret Signals, Absent Masters and the Trembling of the Contours: 15Walter Benjamin, Yvonne Rainer and the Repeatability of Gesture
Swen Steinhäuser
Chapter 2 - All the Home’s a Stage: Uncanny Encounters Between Auditorium and Oikos
Alan Read
Chapter 3 - Repetition as Technology of the Numinous in Performance: The Artist Is Present by Marina Abramovic´
Silvia Battista
Chapter 4 - When Is a Joke not a Joke? Reading (and Re-reading) Stewart Lee’s ‘The Rap Singers’
Emma Bennett
Chapter 5 - The Crying Channel
Claire Hind and Gary Winters
Chapter 6 -The Cyclical Pleasures and Deaths of Symbolization: How to Become 117 a Cupcake/The Famous’ Adaptation of Frankenstein
Lauren Barri Holstein
Chapter 7 - A Pointless Pastime? Early Nineteenth-Century Pin-Prick Imagery
Alice Barnaby
Chapter 8 - Repeated Acts of Intimacy and Harm in Andrea Brady’s Mutability: Scripts for Infancy
Gareth Farmer
Chapter 9 -‘I Was Not HEARD’: Trauma and Articulation in the Poetry of Geraldine Monk
Linda Kemp
Chapter 10 - Déjà-vu, Doubles and Dread: The Uncanny and Christopher Smith’s Triangle
Ruth McPhee
Chapter 11 - Farewell to Farewell: Impossible Endings and Unfinished Finitudes
Eirini Kartsaki
Afterword: Repetition or Recognition?
Clare Foster

This edited volume frames repetition as a fundamental and dynamic dimension of Western cultural production. In 11 essays that engage with white Euro-American theatre, dance, performance art, stand-up comedy, visual art, craft, film, and poetry, contributors differently explore and enact the enduring tensions that mark repetition as a de/stabilizing force in the constitution of art, subjectivity, and social life. A unifying theme is the pleasure and difficulty of repetition’s returns. For example, Emma Bennett engages with repetition as a methodology to read and re-read the tension of waiting again and again for the punchline in Stewart Lee’s rambling, repetitive joke “The Rap Singers”; Alice Barnaby demonstrates that the repetitive, seemingly “pointless” domestic pastime of copying images through pin-pricking was a creative and critical practice of empiricism; and editor Eirini Kartsaki’s contribution ruminates on three examples of Books 197 subjects who repeatedly return to the same event, even as they enact a desire for and fear of the end of this return. These pieces point to the formal strength of this work: each chapter repeats and revises repetition as a concept and method, performatively undoing the reader’s attempts to resolve the question of repetition with each iteration.

'“Repetition creates bliss”, Roland Barthes once argued. In an era in which we hear repetition and think strain, when the repeated gesture is a sign for alienated labour, boredom or the abandonment of thought, this collection of essays shows how repetition can be a figure of creativity – not only in the art forms of visual art, dance, performance and poetry which are its subjects, but also in the lived experiences of work, desire, play and political solidarity. Deeply insightful and more than a little compulsive, these explorations of repetition reveal a tactic and a drive at the heart of art’s relationship to contemporary spaces and bodies'

'This is a book full of fascinations. And also of passions, pleasures, novelties, dissatisfactions and griefs. It is a book about the efforts we make to enact and to understand, to educate and politicise, about how to value that which is perpetually arriving, doing and undoing itself; and also how to say goodbye. While making its case for the centrality of repetition, as constitutive of a range of art practices - through performance, stand-up comedy, poetry, film, craft work and much more - On Repetition is no less concerned with those practices of investigation and attention, of critical recall and affective resistance, through which the lessons of art may be turned productively through the fabric of our lives. As such, it is also a book about humanities: making its own multi-voiced but assured case for the humanities, while investigating the ways that "our" humanity is ever getting away from us, into multiplicity and strangeness and the unforeseen of what comes next.'

'The Danish philosopher Kierkegaard was most prescient when he claimed at the outset of his 1843 novella Repetition: ‘Say what you will, the question of repetition will play a very important role in modern philosophy; for repetition is a crucial expression for what recollection was to the Greeks’. Eirini Kartsaki’s edited collection On Repetition: Writing, Performance & Art bears this out and then some. Contrary to the still lingering assumption that modern art and philosophy broke free from traditional beliefs and practices, this volume retrieves ‘repetition’ as a concept with at least as much modern compulsion as ‘originality’.'

'On Repetition is a book about arts, philosophy, humanities and the West. In the West, an air of staleness clings to the concept of repetition. Artistic value is prescribed according to ideas of novelty and originality. A work of art that is branded repetitive might as well have been called unoriginal, apathetic or redundant. It is precisely this persisting notion of negativity that the 12 authors of this volume write against. In the process, they unearth not only a multiplicity of perspectives on the aesthetic, political, emotional and cognitive implications of the use of repetition in performance and art, but they also manage the self-reflexive task of asking what role repetition can play when writing for and within the humanities. The answers they find are surprisingly varied.'

'The greatest strength of the volume lies in its multipronged appraisal of repetition, whereby contributors re-read, re-articulate, and re-format the concept of repetition in multidisciplinary contexts. The overall effect of this range of articulations produces a dialogue of sorts, in which a conversation around the affective, performative, creative, and intellectual applications of repetition modulates from chapter to chapter. '