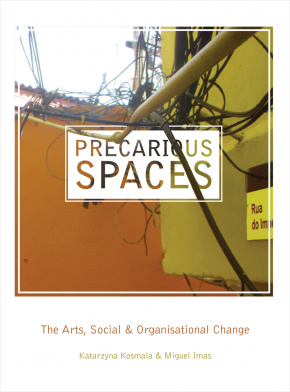 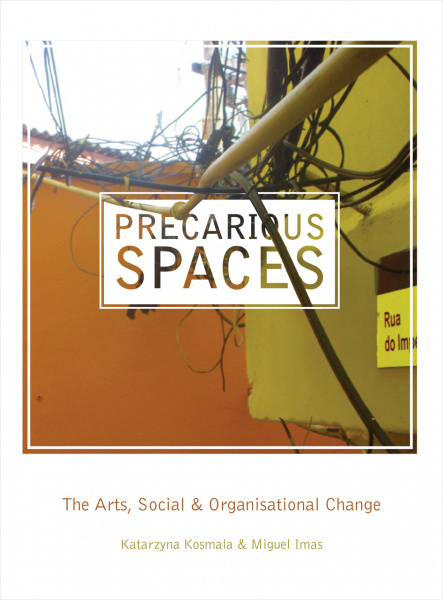 The Arts, Social and Organizational Change

Using an arts-based inquiry, Precarious Spaces addresses current concerns around the instrumentality and agency of art in the context of the precarity of daily life. The book offers a survey of socially and community-engaged art practices in South America, focusing in particular on Brazil's 'informal' situation, and contributes much to the ongoing debate of the possibility for change through social, environmental and ecological solutions. The individual chapters, compiled by Katarzyna Kosmala and Miguel Imas, present a wide spectrum of contemporary social agency models with a particular emphasis on detailed case studies and local histories. Featuring critical reflections on the spaces of urban voids, derelict buildings, self-built communities such as favela and roadside occupations, Precarious Spaces will make readers question their assumptions about precarity, and life in precarious realms.

Katarzyna Kosmala Ph.D. is Reader in Visual Culture and Organization, University of the West of Scotland, UK; Visiting Research Fellow at GEXcel, Institute of Thematic Gender Studies, Linköping University & Örebro University, Sweden and Visiting Professor at the Getulio Vargas Foundation in Rio de Janeiro, Brazil, a curator and freelance art writer. She researches and writes on aspects of construction and representation of gender and identity politics in contemporary (visual) culture, creative work, cultural labour and discourses of creativity, identity and community in the context of a globalising network society, art production and enterprise; arts-run projects and politics of representation.

Miguel Imas is a senior lecturer in organisational and social psychology at Kingston University, London, and a research associate of the London Multimedia Lab at the London School of Economics. He is also one of the editors of Precarious Spaces.

'Cultural politics has melted into thin air, or more accurately, this once powerful New Left paradigm has been monetized by finance capital, its dissent thoroughly commodified. But all is not lost. Enter Precarious Spaces. Packed with inventive methodologies and valuable case studies co-editors Katarzyna Kosmala and Miguel Imas have mobilized a remarkable cadre of critically engaged scholars for their project, who do not so much reject their allotted state of precarity, but who instead “flip it” around to their collective advantage. Precarious Spaces is a book, as much as it is a living theoretical framework offering essential lessons about the emerging art of precariousness. Focusing primarily on the Global South, which as we know is not always in The South, Precarious Spaces maps-out a process of “inverse colonialism” whereby those who dwell along the borders of a collapsing society strategically rag-pick and recycle its left-overs in order to assemble a survivable world from whatever is at hand. As precarity itself migrates from the perimeter into the general conditions of contemporary life, Precarious Spaces proves one thing above all else: resistance is not futile.'

'Precarious Spaces invites thinking about the multiple dimensions of the relationship between precarity and territory, culture and space, social change and art intervention in context of different experiences and practices in the North as well as, and especially, in the Global South. Individual chapters through lens of cultural studies, postcolonial studies, feminism and political economy, in an interdisciplinary way, analyse practices of autonomy construction in the era of globalization by offering us a compilation of social and politically innovative engagement. This book is not about an accumulation of experiences and practices sharing a desire of resistance. The common thread that stands out in this edited collection, is the proliferation of precarious spaces, heterogeneous but not marginal, which are relevant to understanding of the nature of the resistance to the global capital. Spaces like Mare Complex, the Fábricas Recuperadas, or the "occupied" fields in the South of Brazil, as well as artistic interventions like Favela Painting in Rio de Janeiro, Autoconstrucción in Mexico City, or the Museum of Photography in Lima, show the heterogeneity of precarity and the multiple dimensions of resistance. Through advanced logics and proposed actions, the volume seeks to generate new relationships between territory and culture. In a dialogue between Global South and Global North privileges were not assigned. Drawing on writings of several theorists such as Spivak, Mignolo, Negri, Butler, Santos or Garcia Canclini to name but few, articulated together with the voice of the volume’s contributors, individual chapters help us to think through dynamics of resistance and dimensions of precarity.'

'This book presents an important and timely documentation of political and community-based art practices, focusing on Latin America, where in the past few decades the most inspiring social and political experiments have taken place. In times when austerity and precarity also touch those states and regions considered as “rich”, self-organization becomes a tool of survival all across the world.'