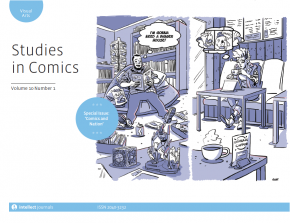 Studies in Comics 9.2 is now available

Intellect is happy to announce that Studies in Comics 9.2 is now available! For more information about the journal, recent issue and calls for papers, click here >> www.intellectbooks.com/studies-in-comics

Studies in Comics aims to describe the nature of comics, to identify the medium as a distinct art form, and to address the medium's formal properties. The emerging field of comics studies is a model for interdisciplinary research and in this spirit this journal welcomes all approaches. This journal is international in scope and provides an inclusive space in which researchers from all backgrounds can present new thinking on comics to a global audience. The journal will promote the close analysis of the comics page/text using a variety of methodologies. Its specific goal, however, is to expand the relationship between comics and theory and to articulate a "theory of comics". The journal also includes reviews of new comics, criticism, and exhibitions, and a dedicated online space for cutting-edge and emergent creative work.

Meaning from movement: Blurring the temporal border between animation and comics
Joshua Gowdy

Doujinshi and Comiket: A day of ‘hare’
Tara McInerney