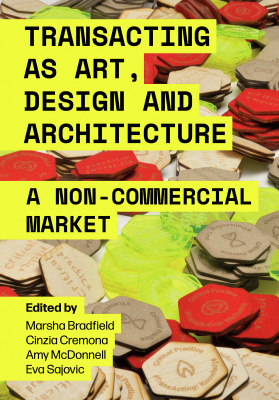 Transacting as Art, Design and Architecture 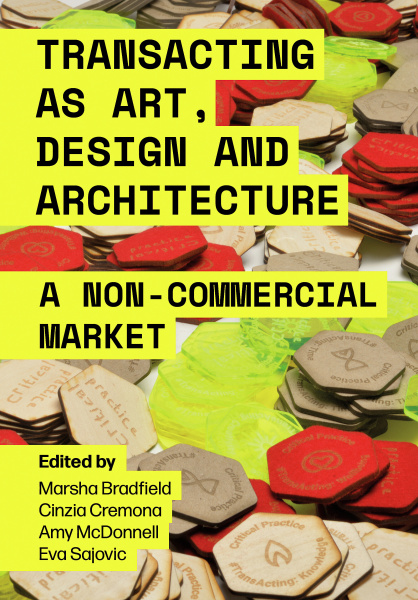 A combination of practical and theoretical writing, this book chronicles the realization of #TransActing: A Market of Values, an international non-commercial popup market held at Chelsea College of Arts, coordinated by Critical Practice Research Cluster, a London-based network of artists, designers, curators and academics. 96 col. plates.

Transacting as Art, Design and Architecture: A Non-Commercial Market re-performs the original event #TransActing: A Market of Values as a printed text with the ambition of investing in the published word and image at least some of the original market’s depth and liveness. Holding fast to the experimental ethos of Critical Practice, this anthology does not shy away from risk when the aim is expanding the fields of art, design and architectural research. The authors’ distinct but also overlapping forms (practical, poetic, analytical, etc.) track with the plurality of voices the processes that have nurtured the cluster as it has worked internationally for more than a decade to produce unique projects.

The book opens with contributions that reflect on TransActing as collaborative practice-based research. The introduction contextualizes this popup market within London’s long history of local marketplaces. Cued by emerging government policy on market sustainability, the tripartite of place, people and prosperity helps to frame TransActing. Taking a different approach, a partial self-portrait of Critical Practice traces TransActing’s becoming over more than a decade of activity and five years of research on value. This is followed by an account of the market’s physical infrastructure: the prototyping of bespoke stalls which were built from recycled materials, an approach inspired by an early example of open-source furniture design. This comes to life in the next section: polyphonic observations on the stalls in use and the market more generally. The stallholders’ reflections capture the experience of those directly involved and are richly illustrated with images of or related to their stalls.

The second part of Transacting as Art, Design and Architecture is composed of commissioned texts to contextualise the market by weaving together references from various fields. These include celebrating the value system of TransActing, especially its critique econometrics. Closely connected to the latter, which was occasioned by Critical Practice’s tenth anniversary, is the subsequent paper's consideration of invisible, feminized labour, which is as undervalued as it is indispensable to cultural production. Taking a slightly different tack is the use of architectural theory (past and present) to trace the transforming nature of the public market, especially as an arena of consumerism. This is followed by an account that looks at the experience of TransActing from the perspective of its local currency. This story is followed by a conversation on the art market and/or the markets of art. This brings the reader to a manifesto-like text that calls for solidarity through publishing, understood as the co-production of meaning through a distributed social process. The penultimate contribution to this collection considers TransActing as a built environment with reference to the market’s shelters and platforms. Finally, a glossary rounds off and opens up the publication as a resource. This compilation of key terms adds nuance to the language used throughout this publication to indicate its resonance in the discourse of Critical Practice.

The collection aims to prioritize practice-based insights as an alternative to knowledge-based ones. In this way the book aims to be a refreshing take, one that moves art-research discussions beyond the creation of knowledge. As such, this book will appeal to all those involved in the ‘research turn’ in contemporary cultural production, including those working in institutions and organizations, especially ones with strong community engagement programmes, as well as independent practitioners working in social and socially engaged practice.

Primary readership will be practitioners of art, design, curating and architecture and students studying in these fields. The secondary audience will include cultural producers, theorists, educators and others who are interested in how art and other forms of creative practice can challenge the ‘usual’ financial circuits of value and open up alternatives.

Marsha Bradfield rides the hyphen as an archivist-artist-curator-educator-researcher-writer. She variously explores the subject of interdependence and works with groups including Critical Practice, Precarious Workers Brigade and Incidental Unit (the third iteration of the Artist Placement Group). Marsha is based at the University of the Arts London where she is a practice-based researcher teaching across art and design.

Cinzia Cremona is an artist, researcher and Visiting Fellow at Macquarie University, Sydney in the multi departmental research group VISOR (Virtual and Interactive Simulations of Reality), where she is developing a 360 degrees video work. She experiments with the materiality of screens and remote intimacy in relational, networked, immersive, video and performance practices.

Amy McDonnell is a curator, researcher and environmental campaigner whose practice engages with contemporary themes of collectivity, collaborative exhibition making and political participation. Amy completed a Ph.D. at Chelsea College of Arts in 2017 in curation in which she trialled models of self-organization with different on and off line platforms between a group of artists in Cuba and the United Kingdom.

Eva Sajovic is a Slovene born artist photographer, living and working in London. Her focus is on socially engaged, participatory practice through which she explores the drivers of global displacement such as regeneration, poverty, trafficking, culture and climate change.

TRANSACTING AS AN ICEBERG

REMEMBERING AND FORGETTING IN CONSUMERISM

TECHNIQUES OF ABERRANT EXTRACTION: TRANSACTING SURPLUS ACTS IN AN AGE OF SPECULATION

A CONVERSATION ON VALUE WITH ANDREA PHILLIPS

PLATFORMS AND SHELTERS: A REFLECTION ON #TRANSACTING: A MARKET OF VALUES

Transacting as Art, Design and Architecture's strength is the multi-vocal and comprehensive manner in which it approaches questions of market, marketplace and exchange. The book is also strengthened by the cacophony of voices that contribute to the imagining and enactment of a different kind of marketplace. In this sense, it is a tour de force, combining conceptual, practice and process-derived insights to offer an inspiring vision of being and living otherwise.