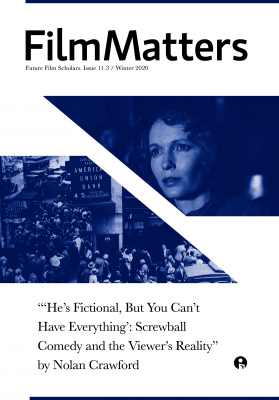 Intellect is pleased to announce that Film Matters 12.1 is out now!

By Tim Palmer and Liza Palmer

Slow Motion in the Age of Intensified Continuity

From Lotte Reiniger to Nguyễn Trinh Thi: Examining the Evolution of Non-Western Representation in Artists’ Film and Video

Romanticist Philosophy in Hindi Cinema: A Comparative Study of Keats, Shelley, and October

By Anushree Joshi and Saman Waheed

“To Begin on Again”: A Study of Early Cinema’s Unique Influence on Modernist Literature

Deconstructing the Other’s Other: Analyzing the Chinese Female Image in the Film Saving Face

“We Weren’t Friends after This”: Michael Paré on Playing the Adult Trip Fontaine

The Trial of the Chicago 7: More Radical than Fiction

Raise the Red Lantern: A Critique of Patriarchy in Chinese Cinema

By August U. Schaller

By Drew Pisano and Jesse Schlotterbeck