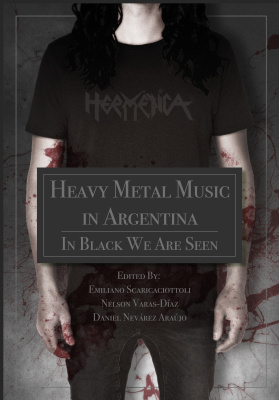 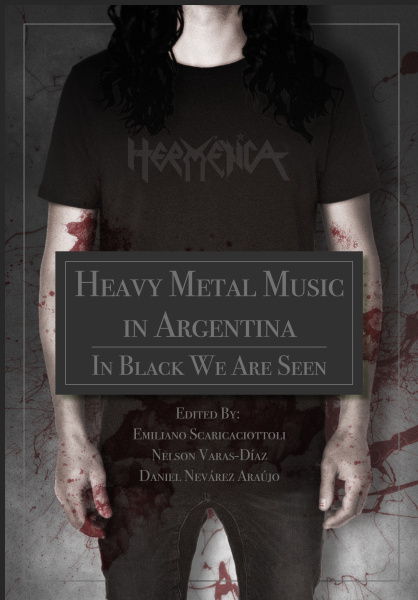 In Black We Are Seen

This edited collection is an interdisciplinary study of heavy metal culture in Argentina between 1983 and 2002. Contributors address the music’s rituals, circulations, cultural products, lyrics and intertexts, allowing readers to rethink the place of national heavy metal within Argentinean politics and economics, after the end of the dictatorship.

An in-depth regional discussion of heavy metal music, Heavy Metal Music in Argentina explores metal music as a catalyst for social change and site for engaging political reflection. Originally published in Spanish and sold locally in Argentina, this is the first time the work has been available in English.

Edited by leading researchers, this collection addresses the music’s rituals, circulations, cultural products, lyrics and allows readers to rethink the place of heavy metal within Argentinean politics and economics. Exclusively written by members of the Group for Interdisciplinary Research on Argentinian Heavy Metal (GIIHMA) in a communal approach to scholarship, the book echoes the working-class voices that marked early post-dictatorship metal music in Argentina.

This is the first collection of essays on Argentine metal music. It has opened up research channels between different universities in the country while also engaging a non-academic audience, and widening the potential market for the book.

The book makes an interdisciplinary examination of a complex and fascinating object: it allows for the examination, discussion and analysis of its nationalist postulates, relationship with the Creole culture (for example, with nineteenth-century ‘gauchesca’ literature), indigenism, and with the political processes of contemporary Argentina.

Metal Music Studies, as an academic area of inquiry, has focused mostly on the music’s cultural components in Europe and the United States. The few books that have addressed metal music as a global phenomenon, have severely neglected the inclusion of Latin American countries. Argentina, with the largest and oldest metal scene in the region, has also been neglected in the existing literature. There is a growing interest in this area, as demonstrated by the emergence of documentary film on metal music in Latin America.

The book has potential use as a resource on courses in several disciplines including sociology, cultural studies, musicology, ethnomusicology, sociology and Latin American studies.  It will also be of interest to the more general readers with an interest in the musical genre.

Emiliano Scaricaciottoli is professor at the University of Buenos Aires. He is the coordinator for the Group for Interdisciplinary Research on Argentinian Heavy Metal (GIIHMA) and has edited two books of essays and another seven productions on rock and metal in Argentina.

Nelson Varas-Díaz is professor of social-community psychology at Florida International University. He is the coeditor of the journal Metal Music Studies and the director of the documentary film Songs of Injustice: Heavy Metal Music in Latin America.

Preface to the Second Edition vii

Introduction: A Window into Heavy Metal Scholarship in the Global South xv

1. Heavy Metal as a Subculture in Argentina: Identity and Resistance 2

3. Heavenly Hosts and Other Demons: Reflections Concerning a

4. Walkabout, Just Walking about for the Sake of Walking: The Journey

as an Ethos in the Poetics of Ricardo Iorio 46

5. Passion and Ethics: A Space for Voice and Tradition in Iorio’s Lyrics 58

6. The Reason Behind My Writing: Another Day of Being 72

'This book asserts that metal music is part of Argentinian culture. It is a compelling read, as both an illuminating and a pointed rebuke. Illuminating in that it opens a window onto a contained and vibrant subculture kept within Argentinian borders, emerging in the 1980s under a military dictatorship; a rebuke in the sense that the reach of metal music and metal music studies can no longer be confined to the global North.  This collection of chapters, translated from Spanish, shows that the Argentinean metal scene is deeply embedded in a social and political currency that reaches far beyond its borders. The hope is that this work paves the way for an increased attention to metal music subcultures, one that generates new knowledge for a truly global audience.'

'This is an indispensable collection for anyone who cares about metal in the global south, or about music and politics in general. A fascinating, groundbreaking contribution to the emerging field of global metal studies.'

'The volume brings together seven works by eight authors who deal in depth with various aspects of heavy metal music and culture in the South American country. [...] As Scaricaciottoli, Varas-Diaz and Nevárez Araujo point out in the introduction, the importance of this work is based on the understanding that metal music in Argentina has built its own culture, a culture from the south that should be understood not as an appendix or derivation of their counterparts in the global north, and that their political dimension is inextricably linked to processes of emancipation and social change.'

'Heavy Metal Music in Argentina: In Black We Are Seen works on the axis of the social and political implications of heavy metal in our country. In that already stale controversy that places the genre within a deaf bell that separates it from the historical reference and its production conditions, the essays highlight its political will and focus on the working class represented in a lyrical corpus that starts in post-dictatorship, extends to the crisis of 2001 and a few more years. [...] The publication of this book in English is an exceptional opportunity to make visible in the transnational field the studies on heavy metal by Argentine researchers who work from other reading parameters, crossed by their experience as well as by their critical apparatus, looking from the inside and not with a magnifying glass or tweezers to keep your fingers clean.'