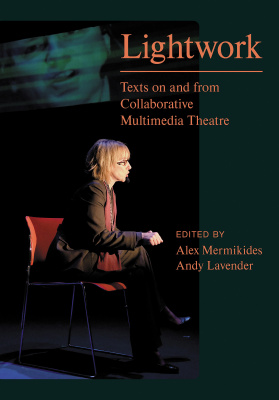 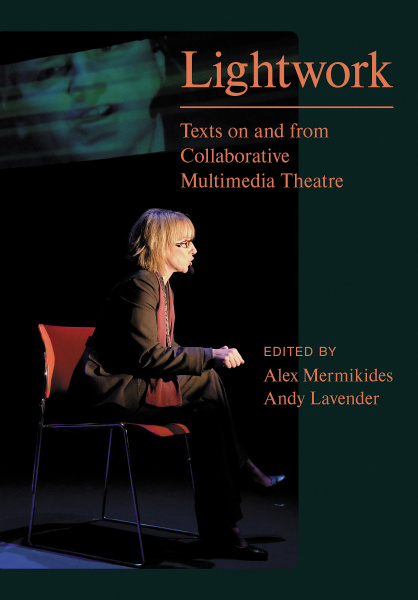 Texts on and from Collaborative Multimedia Theatre

Collection of performance texts from the experimental theatre company Lightwork, along with short essays by key participants. Geared around collaborative creation, it covers an array of approaches including devised, multimedia and site-specific work, providing a rich resource for those making or studying contemporary performance. 20 illus.

This volume brings together performance texts from nine productions by the experimental theatre company Lightwork and one playtext from Lightwork’s precursor company Academy Productions, presented between 1997 and 2011.

Lightwork specialized in collaboratively created and multimedia performance. The company also experimented with several performance forms that emerged at the turn of the twenty-first century, including verbatim and site-specific approaches. Because of this, the texts cover a range of forms and formats – scripted plays such as Here’s What I Did With My Body One Day by Dan Rebellato and Blavatsky by Clare Bayley; multimedia adaptations of classical myths such as Back At You (based on the story of Echo and Narcissus) and Once I was Dead (based on the story of Daedalus and Icarus); site-specific experiments such as The Good Actor, which took place in various spaces across Hoxton Hall, a Victorian theatre in London’s East End; and the use of verbatim witness testimony from the Court of Bosnia and Herzegovina, War Crimes section in Sarajevo Story.

The defining aspect of the Lightwork aesthetic is that multimedia and scenographic experimentation does not come at the expense of the mainstays of dramatic theatre: character, story and emotional resonance. What lies at the heart of the Lightwork shows you will encounter here are human-scale stories: relationships between lovers or family members, confrontations with the past (both as personal and as cultural history) and, in many cases, matters of life or death that entail wrestling with causality, consequence and fate.

The twelve-year span covered by this work reflects a period in British performance practice when the interrelation of page and stage, process and production, text and ‘non-text’, were being radically rethought. In the collaborative and processual theatre making that Lightwork exemplifies, the text may be one element among many and is more likely to be the outcome of the process than its precursor.

How do such playtexts (or performance texts) differ from those that are conceived and scripted by a single desk-based playwright in advance of the rehearsal? What gaps are left when the work of many hands is channelled through the pen (or keyboard) of one among them? The texts featured in this volume represent a number of answers to these questions about the nature of writing for the stage.

The performance texts are each preceded (and sometime followed) by short essays written by some of the many people who have been involved in productions by Lightwork, including established academics and theatre practitioners: David Annen, Clare Bayley, Gregg Fisher, Sarah Gorman, Andy Lavender, Aneta Mancewicz, Bella Merlin, Alex Mermikides, Jo Parker, Dan Rebellato, and Ayse Tashkiran. Their contributions reflect the collaborative nature of the company and the respect that it accorded the various disciplinary perspectives that make up a theatre company.

There are sections on scenography, sound design and technical operation, as well as on those crafts that might more usually draw attention: directing, writing and acting. These contributions offer an insight into the collaborative, multi-layered and sometimes messy business of their creation from an individual maker’s or spectator’s point of view.

This book will be invaluable for those who are making, studying or researching performance in the twenty-first century, and an essential resource for the rehearsal room.

It will have appeal for general readers interested in new texts and processes in theatre and performance, and individual texts are likely to be of interest to specialist researchers working in related fields – for example performance and the occult (Blavatsky), performance and conflict (Sarajevo Story).

Alex Mermikides is doctoral programme leader at the Guildhall School of Music & Drama. Recent publications include Performance and the Medical Body 2016, co-edited with Gianna Bouchard, and Performance, Medicine and the Human 2020 (both by Methuen Drama Bloomsbury); she is artistic director of Chimera.

Andy Lavender is vice principal and director of production arts, and professor of theatre and performance, at Guildhall School of Music & Drama. He is the author of Performance in the Twenty-First Century: Theatres of Engagement (Routledge 2016), series editor of 4x45 (Digital Theatre+ and Routledge) and artistic director of Lightwork.