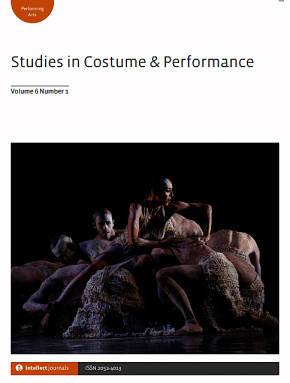 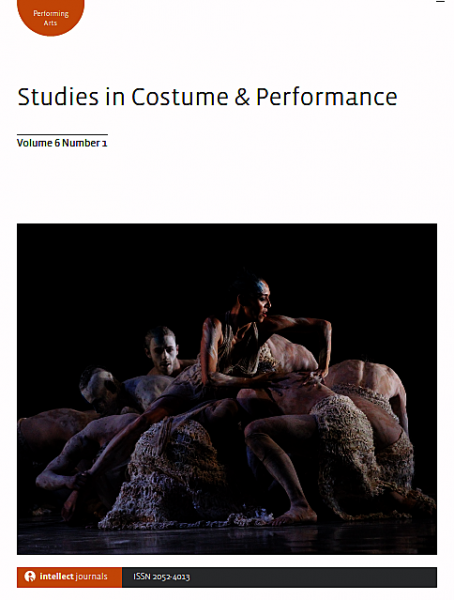 Studies in Costume & Performance is a double-blind peer-reviewed journal that aims to encourage, generate and disseminate critical discourse on costume and the relationship between costume and performance. It considers costume as a symbiotic articulation of the body of the performer which is visual, cultural, political, material, temporal and performative. Whether performed live, mediated through a screen, or encountered in an archive, costume embodies and reflects not only the performance, but also societies, cultures and communities.

Studies in Costume & Performance aims to encourage, generate and disseminate critical discourse on costume and the relationship between costume, performance and wider concerns. It considers costume as a symbiotic articulation of the body of the performer which is visual, cultural, political, material, temporal and performative. Past and current practice is considered through the 'reading' of the costumed body as a communication of embodied narratives. Whether performed live, mediated through a screen, or encountered in an archive, costume embodies and reflects not only the performance, but also societies, cultures and communities.

The work included in the journal addresses costume in an expanded manner, taking into consideration both historical and contemporary concerns, including ethical entanglements with gender, race, class and social exclusion. It also engages with technological and digital advances, and ecocritical transformations of the world. The journal brings together interdisciplinary scholars from a growing number of fields as well as critically engaged practitioners to reflect and debate costume in performance, its production and reception, as well as its advancing academic critical thought. As a dynamically developing area of research, we actively invite authors, reviewers and guest editors from diverse areas of expertise and underrepresented geopolitical areas to problematize the multiple agencies of costume.

To submit an article, please follow the 'Submit' button on the left of this page.
All articles submitted should be original work and must not be under consideration by other publications.
Journal contributors will receive a free PDF copy of their final work upon publication. Print copies of the journal may also be purchased by contributors at half price.
Download the Notes for Contributors below for information on format and style of submissions. If you need this document in a more accessible format, please contact info@intellectbooks.com. Find more information on Intellect's Accessibility page.
Notes for Contributors Download

There are multiple phases in the process of double-blind peer review that is undertaken for each published article in Studies in Costume and Performance:

Costume plays an important part both in traditional fairy tales and in their adaptations in diverse media forms, especially in performing arts such as theatre, ballet, opera, and musical, but also in other media such as film, visual art, manga, theme parks, video games, and digital and social media. Clothes worn by characters in fairy tales function according to the internal narrative logic that constitutes and organizes the story-world, defining and transforming the wearers' identities and social contexts. In this sense, fairy-tale clothes can be regarded as costume, defined as the kind of clothes that bear significance, within a staged, performed moment for an audience, ranging from traditional theatre to live art, through spoken, movement based, or sung performance. The ubiquitous persistence of fairy tales in popular cultures across the globe renders them a means to express social, cultural and psychological anxieties, evoking ethical dimensions of individual and collective struggles. As such, the way characters are embodied through their clothes bears significant narrative and performative potential in layering of meanings in performance making.

Equally, iconic fairy tale characters may float away from their narrative roles and be found to be expressing key themes in contemporary performance-based artistic practices. For example, Korean-born photographer Chan-Hyo Bae in his Existing in Costume series (2006-) casts himself in the roles of princesses in European fairy tales such as Cinderella and Sleeping Beauty by wearing authentic dresses worn by ruling-class women in eighteenth-century England, thereby foregrounding the physical and metaphorical tension between the male Asian body and those kinds of historical costumes which evidence the Eurocentric colonial norms still dominant in today's globalized culture.

While the relationship between fashion and the fairy tale has been examined in the fields of fashion studies and fairy-tale criticism, the concept of costume in the fairy tale has not yet been sufficiently explored. We believe that an interdisciplinary, cross-cultural approach to this topic will offer fresh insight into the fields of costume studies, fairy-tale studies, performance studies, and, more broadly, studies of art, narrative, and culture across time, space, and discipline. Topics may include, but are not limited to:

Please send any questions regarding submissions to: